This is a blog I’ve been putting off writing because of the potential firestorm of controversy it will cause. But it’s time to end the misapplication of the EVIDENCE by too many Doctors. And more importantly, end the mis-treatment of far too many patients who know no better. Do Men using therapeutic testosterone ever need to use an AI medication? Because we are all biochemically unique and the realms of the quantum prove ALL IS POSSIBLE, the answer is YES. BUT (and this is a powerfully distinct BUT), only after a Doctor has tried Dr Keith Nichol’s and my NO FAILURE PROTOCOL to first avoid and ultimately withdraw a patient from using an AI medication like Arimidex:

We must as TIP OF THE SPEAR optimization specialists (Doctors and Subject Matter Experts alike) work with the evidence as it is clearly indicated. The old days where ALL OF US thought using an AI was beneficial has been proven CLINICALLY WRONG. Suppressing a Man’s estrogen (e2) has been proven to offer ZERO THERAPEUTIC VALUE ‘long term’. After nearly 80 years of giving men therapeutic testosterone, and seeing corresponding increases in their estrogen levels (e2), every single study that shows the benefit of T(there are now thousands), DID NOT BLOCK their estrogen.

The main benefits from therapeutic T come from its conversion into estradiol. Let me repeat that again for those not listening or reading close enough. Testosterone MUST aromatize to estradiol(estrogen)in order to confer its protective effects to the many biological systems which require it. This conversion (from Testosterone into Estradiol) is essential for preventing Alzeimer’s Disease and Dementia, improving lipid profiles, strengthening bone mineral density and preventing cardiovascular disease. And this is just naming a few of the protective effects.

In fact, the evidence shows suppressing estrogen in Men causes way too many problems like, bone mineral density issues, reduced synovial fluid in joint capsules (leading to pain and potential injury when training), visceral body fat deposition and the real killer, SEXUAL DYSFUNCTION. This fascination by physician’s to keep estrogen levels WITHIN A NARROW RANGE and CONTROLLED (which gives far too many men the impression there is a SWEET SPOT for estrogen) IS NOT SUPPORTED by any evidence anywhere.

But as we show in this MUST WATCH PODCAST from The TOT Doctor’s Roundtable, this misnomer comes from the body building world of 10-15 years ago when blocking estrogen was the rage. At that time, most body builders and their Doctor’s believed blocking estrogen was important to get into contest ready condition (ie leaning out to single digit body fat %’s) and it was also theorized that ESTROGEN CAUSED CANCER. Now that we know that estradiol is given to women with cancer and also to Men with prostate cancer, it is well understood that higher estradiol levels DO NOT CAUSE CANCER. (At least in otherwise healthy men)

The biggest issue we have currently in Optimization Medicine circles (and TOT/HRT in general) is that too many Men are given AI medications at the onset of treatment without any corresponding symptoms or side effects indicating their is a clinical need to initiate therapy. This creates a total biological system snafu as there are too many chemicals in the endocrine system to allow for a proper baseline of blood work to be measured.

How can any reasonable Doctor understand what medication is doing what inside that patient’s system? THEY CAN’T. To all the Doctor’s who read this blog (and there will be THOUSANDS AROUND THE WORLD WHO DO), STOP starting patients out with 1mg of Arimidex 3x per week at the onset of testosterone therapy. IN fact, stop using any amount of an AI until you’ve exhausted the No Failure Protocol (NFP) and your patient continues to suffer from the symptoms of elevated levels of estrogen. So if you’ve gotten to this point, you’re asking:

“OK if I buy what you’re saying, WHEN DO I INITIATE AI THERAPY?

Good question. As we indicated above, you rarely will ever need to should you exhaustively follow the steps above in the NO FAILURE PROTOCOL. It works nearly EVERY SINGLE TIME. Dr Nichols has a massive patient database and NOT A SINGLE PATIENT is using an AI nor are any complaining about symptoms or side effects.

You do initiate therapy under the following conditions: Your patient is a visceral fat medical emergency who refuses to adjust his lifestyle or follow the instructions of the NFP and is complaining to you significantly about nipple sensitivity, water retention and mood instability.

Your dosage then is the MINIMUM EFFECTIVE DOSAGE (MED) .275 (or even less when compounded) once or twice per week. As soon as side effects and high estrogen symptoms are resolved, titrate therapy to complete withdrawal. Keeping a man on an AI medication for long term can only lead to HARM. Before I am attacked, YES there will be genetic outliers who OVER AROMATIZE.

For these Men, a micro dose of an AI ‘every so often’ (like literally once or twice a month following the MED principle) MIGHT BE necessary. But even doing this (to alleviate patient side effects)causes harm and deleterious effects to that patient’s biological systems over time.

If you don’t believe me, YOU MUST WATCH these 3 Podcasts with Dr Neal Rouzier for further convincing.

It is important that the patient understands this. But the NFP rarely fails even the genetically disadvantaged. GIVE IT A TRY! What I’ve so far neglected to discuss in this blog is HOW MEN FEEL when using Aromatization Inhibitor Medications. The easiest answer is to share the countless emails, texts and messages I get from Men all over the world complaining about the following: NO SEX DRIVE, JOINT ISSUES, BRAIN FOG, ANXIETY, IRRITABILITY, MOOD INSTABILITY, POOR ERECTIONS, INSOMNIA, LETHARGY.

The list is endless. The majority of these Men have had their estrogen (e2) levels suppressed into the single digits and oftentimes worse. They are suffering far worse than when they were ‘feeling bad’ from Testosterone Deficiency. How can this be? How can there be nonsensical misinformation sites like this online with so many people supporting the message?

I wrote a 600 page BIBLE on the wonders of therapeutic testosterone and I can say assuredly (as it’s the best selling book of all time on the subject) that when it’s done right, Men measure their lives as BEFORE TESTOSTERONE and AFTER TESTOSTERONE OPTIMIZATION. 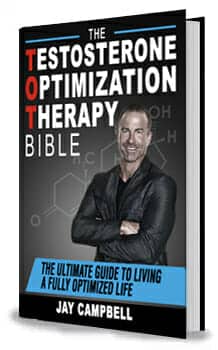 Am I painting the correct picture yet? There is AMPLE EVIDENCE now available that providing Therapeutic Testosterone in the RIGHT WAY, rarely if ever involves the usage of an AI Medication.

As a patient and as a prescribing Doctor you now have EVIDENCE proving that blocking estrogen should rarely if ever happen ESPECIALLY at the start of TOT.

But hey, the choice is yours. Do what thou wilt.

If you are a Physician and don’t believe me, keep using AI’s and sees what happens to your practice as your patients leave to work with Doctor’s who know better. To further illustrate the importance of THE MESSAGE in this article, I’m attaching you a comment thread on the TOT Doctor’s Roundtable Podcast linked above. It presents the argument from both sides and elucidates the AI conversation as transparently as it could ever be online. 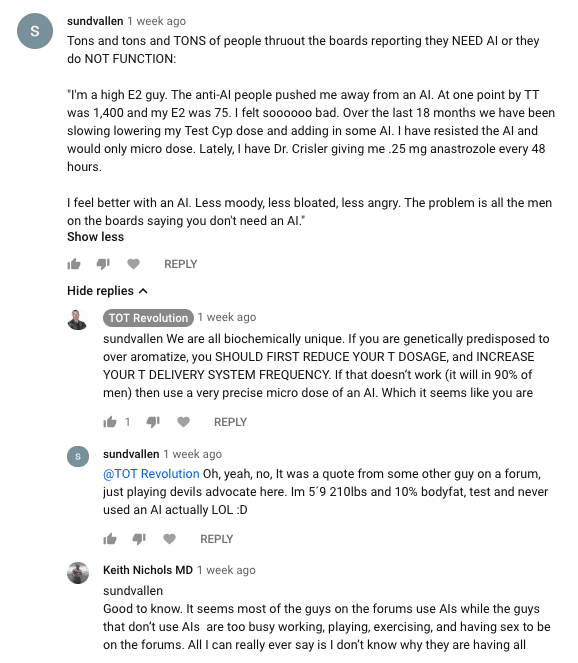 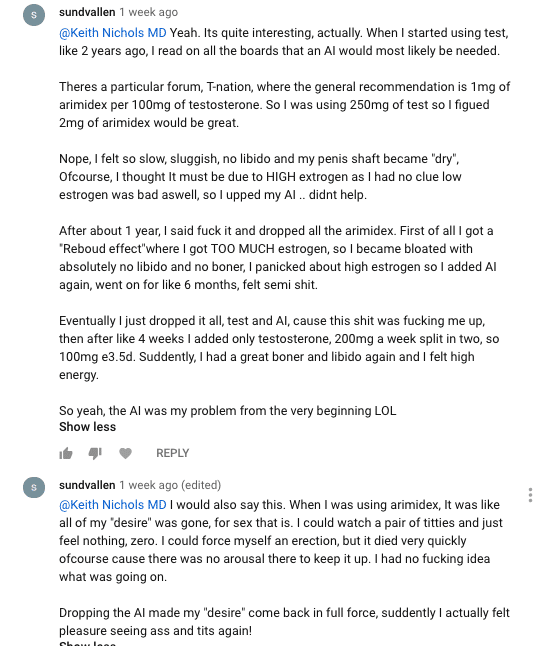 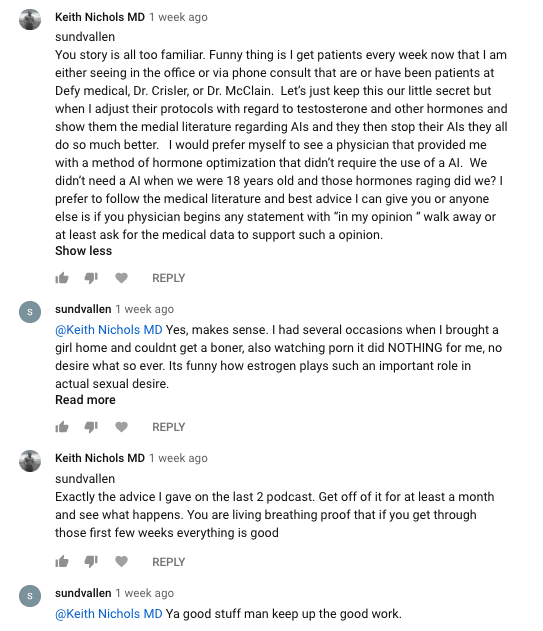