Why Men Ignore The Symptoms of Low Testosterone

A quick glance at this list would logically conclude these symptoms are extremely unpleasant. And doubly so if they have to be tolerated on a daily basis. So why do so many men choose to ignore the signs of low testosterone? 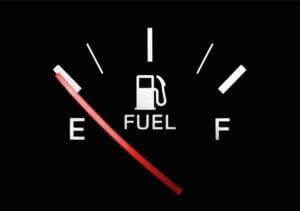 Sadly, the vast majority of men do not recognize the symptoms of low testosterone due to ignorance. The fact is, testosterone replacement therapy is in its infancy. Subsequently, the knowledge is not yet widely available in the public domain. And it’s well known that things often take years to garner acceptance from mainstream culture. Nonetheless, I view this as a chicken and egg scenario. Do men live in ignorance of low testosterone due to a lack of information? No, because the knowledge is available. The average American reads 1 book a year. Therefore, we could say most men live in a state of wilful ignorance. Hence it’s not a lack of information but a lack of intellectual curiosity. Should a man wait for information to roll onto his lap or actively go out there and seek it, because he wants to live a better life?

Due to the prevalence of low testosterone in our society, this saying is truer than ever. Have you already died and sleepwalking through life? If so, do you plan to do something about it? Perhaps my assessment of men’s ignorance is overly harsh. Because many men do indeed go to their doctor after struggling with the symptoms of low testosterone. They may not know about low testosterone, but they trust their doctor to come up with a correct diagnosis. Unfortunately, their blind faith is misplaced.

Most doctors are ignorant when it comes to diagnosing symptoms of testosterone deficiency.

Every day men are turned away by dismissive doctors who treat their symptoms as imaginary, like a parent listening to child talk about their imaginary friend. Or better yet, they are told they are stressed or depressed and given pills(SSRI’s) to solve their woes. They don’t think to determine whether testosterone deficiency could be the root cause. And yet even if they do know about TRT, their judgement is often clouded by a zealous dogma akin to a religious fanatic. You must fit nicely into their predetermined box to be considered for treatment. You must be over 50 years old, you must have testosterone levels of below 300 ng/dl…this list goes on. And many men don’t fit into these boxes, so they are denied treatment. This is a sad indictment of the global medical profession. A field which should be ahead of the curve and not abusing its patients’ trust in such a manner. The Middle Ages mentality of complete deference to an all-knowing doctor is at an end. The Lab Coat God is slowly but surely being replaced. This mindset was acceptable when people knew no better. But in the internet age there is no excuse. Many doctors have shown they cannot be trusted on this subject. So you must do your own research and in a way become your own doctor. 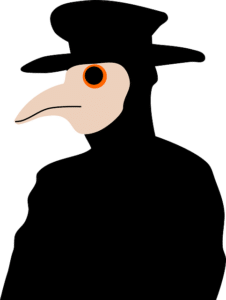 Some doctors still treat low testosterone like the plague.

In addition to men unaware of low testosterone, there are those who understand it yet living in deep denial. I would argue that this is worse than ignorance. So why do men live in denial of low testosterone, despite knowing about it? There are several reasons for this and chief among them is a lack of acceptance. I suspect at its heart is the fragile male ego. Men don’t want want to come to terms with the fact their bodies no longer effectively produce testosterone. Perhaps they feel its ok due to recent societal acceptance of suppressing masculinity. So by denying it, they can shield themselves from the painful truth. Allow me be crystal clear:

There is nothing masculine about low testosterone and living in denial of it.

Furthermore, men deny their low testosterone because of the fear of change. The mindset shift from no medication to reliance on medication for life can be a difficult transition. That said, most men would have no qualms taking medication if they discovered they had diabetes or heart disease. Therefore, could it be the fear of testosterone itself is the issue? Is it likely these men have bought into propaganda of lies and testosterone myths? In particular, by refusing to accept low testosterone men are endangering their health. Despite the media hysteria, study after study has linked low testosterone to health problems and higher mortality rates. There are enough success stories out there from men on TRT to prove its worth. I myself wrote about my positive life changing experience in my article What Happens After 6 Months of TRT. 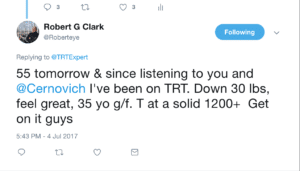 Acceptance of fate may have its place when you have no control over a situation.

In the 21st century you do have control over your hormones.

Maybe you think low testosterone is ‘part of growing old’ or that nature never intended for us to replace our hormones? If you want to live a sexless life, replete with gnawing anxiety and depression and a never-ending brain fog, then that’s on you. Just don’t complain about your choice. Although, that’s hard to do, because low testosterone men are the biggest whiners around. Above all, this attitude toward the symptoms of low testosterone is what baffles me most. Why would you knowingly accept such a shitty quality of life? I can only surmise most men are content to becoming passive spectators in their own lives. 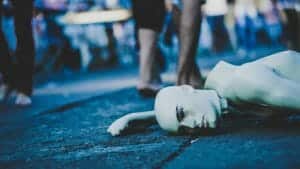 If you’re still unsure about low testosterone, then pick up a copy of Jay Campbell’s book (now the #1 selling book on TRT ever written) or read through the articles on this site. There is no doubt, a diagnosis of low testosterone can come as a shock to the system. But this should only be temporary – you cannot allow the psychological hangover to dictate the rest of your life. Ignorance is bliss. Remaining ignorant of something means you don’t have to take responsibility. Blaming your doctor or your environment is easier. Because taking responsibility is hard. This is why most people don’t do it. We humans are hardwired to seek the path of least resistance. This may have proved a brilliant strategy when our ancestors had to hunt for food and resources were scarce. A means of conserving energy. In an age of abundance and material wealth, you may still live a life of abject misery. No amount of material possessions can compensate when your hormones are out of whack. You simply cannot afford to ignore the reality of low testosterone. A life of low testosterone will consign you to the walking dead. Don’t be among their number. Denying it won’t make it go away. Ignoring the symptoms of low testosterone is like remaining in a house that’s on fire. In the end, the flames will consume you.