I have owed my readers an extensive article about the health benefits of copper peptide GHK-Cu for a long time.

Numerous emails were sent to my loyal subscribers over the past 7 months about this therapeutic peptide and all the ways it can fully optimize your health.

I’ve even mentioned it a few times in my articles about the rise of medical peptides and their unfortunate suppression in the mainstream health industry.

But GHK-Cu is fast approaching worldwide recognition, with the global market for copper peptides already being worth roughly tens of millions of dollars.

Why is this happening?

What are the GHK-Cu benefits that make this peptide so highly sought after?

And what is the absolute BEST source of GHK-Cu you can get your hands on? 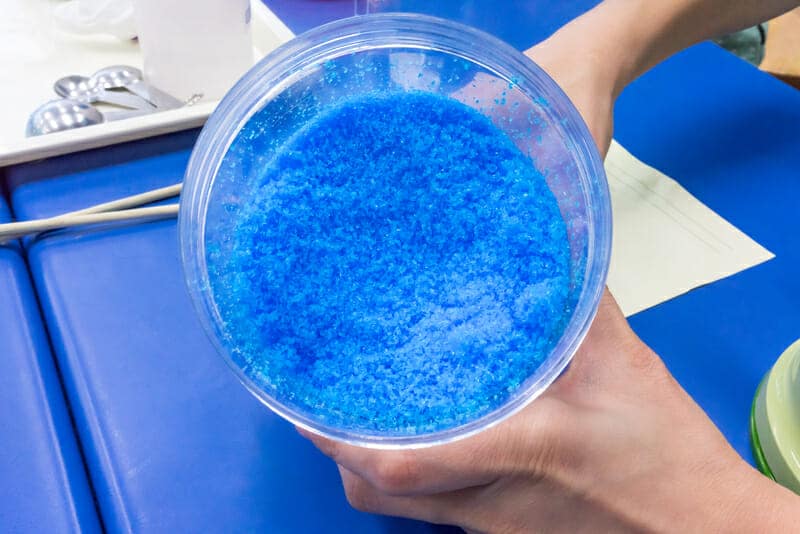 Let me take a brief moment to explain exactly what GHK-Cu is and why it’s such an incredibly powerful biomolecule.

The “GHK” stands for “glycyl-L-histidyl-L-lysine”, which is another way of saying it is a tripeptide (i.e. a peptide consisting of 3 amino acids).

GHK occurs naturally in human serum (blood), urine and saliva… and it turns out to be a vital compound for living organisms:

It wasn’t discovered and isolated until 1973, when Dr. Loren Pickart isolated it from albumin — a protein made in your blood yet produced by the liver — and responsible for maintaining an optimal balance of fluidity within your bloodstream.

Yet it wasn’t GHK doing this by itself.

It turns out that copper (hence the “Cu”) was heavily involved in forming a complex with GHK to provide this effect:

“Subsequent studies established this activity as a tripeptide with an amino acid sequence glycyl-L-histidyl-L-lysine with a strong affinity for copper that readily formed the complex GHK-Cu. It was proposed that GHK-Cu functions as a complex with copper 2+ [i.e. Cu(II)].”

The picture below does a good job of showing the difference between “GHK” and “GHK-Cu”:

And in case you’re wondering why copper itself is so fundamental for human health (as it is an essential mineral that MUST be supplied through diet and supplementation):

“production of red blood cells…regulation of heart rate and blood pressure…absorption of iron…prevention of prostatitis, or inflammation of the prostate…development and maintenance of bone, connective tissue, and organs such as the brain and heart…activation of the immune system”

Since its discovery, four decades of scientific research have been invested into examining all the biological properties of GHK-Cu.

I believe if you had to summarize all of the health benefits of GHK-Cu into a single paragraph, it would like something like this:

But I want to examine each of them in greater detail and give you a sample of how — and why — GHK-Cu remains an untapped source of healing for multiple disease states currently faced by humanity. 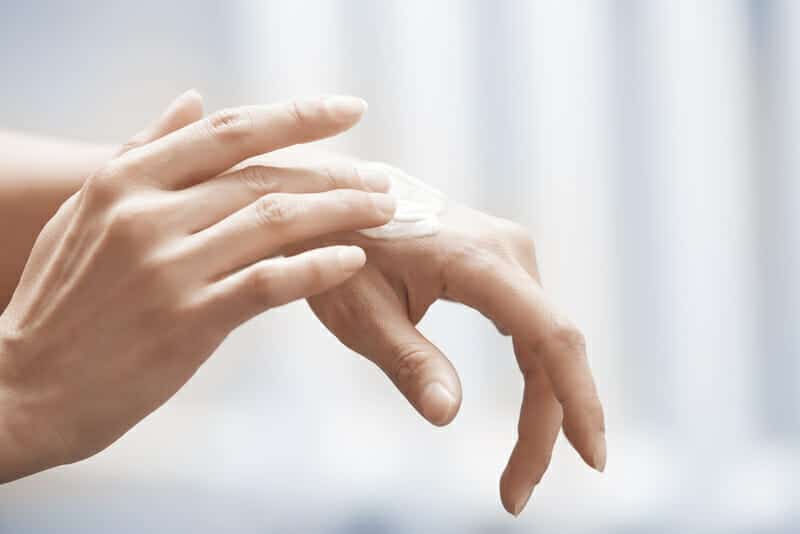 Take a look at all of the cosmetic benefits listed by one of the most extensive literature reviews of GHK-CU done to date:

Here’s a specific use case of GHK-Cu’s cosmetic usefulness in aging women:

“GHK-Cu containing facial cream reduced visible signs of aging after 12 weeks of application to the facial skin of 71 women with signs of photo aging.

The cream improved skin laxity, clarity, and appearance, reduced fine lines and the depth of wrinkles, and increased skin density and thickness when compared with a placebo cream”

Whether you are using GHK-Cu for maintaining already-healthy skin or reversing years of aging, it works equally well.

GHK-Cu May Accelerate the Healing of Wounds

If you have a wound that just won’t heal no matter what you do, GHK-Cu can be especially helpful for speeding up the healing process:

“The most important finding was GHK’s ability to improve wound healing in difficult to heal wounds, such as diabetic wounds in rats.

GHK-Cu treatment resulted in faster wound contraction and epithelization, higher level of antioxidants such as glutathione and ascorbic acid, increased synthesis of collagen, and activation of fibroblasts and mast cells”

Numerous mechanisms are simultaneously at play to explain why GHK-Cu is capable of doing this.

GHK-Cu is known to stimulate the growth of new blood vessels via angiogenesis and widen the diameter of blood vessels, thereby improving blood flow towards damaged tissues.

Doing so allows GHK-Cu to modulate the process of repairing existing tissue by enhancing the development of new tissue.

Another tissue-healing action involves increasing the production of collagen, a protein heavily involved in restoring the strength and structural integrity of damaged tissues.

Finally, GHK-Cu acts as a “feedback signal” for remodeling tissue… meaning once a particular tissue is injured, GHK-Cu tells the body to remove the scarred tissue while generating new and healthier tissue. 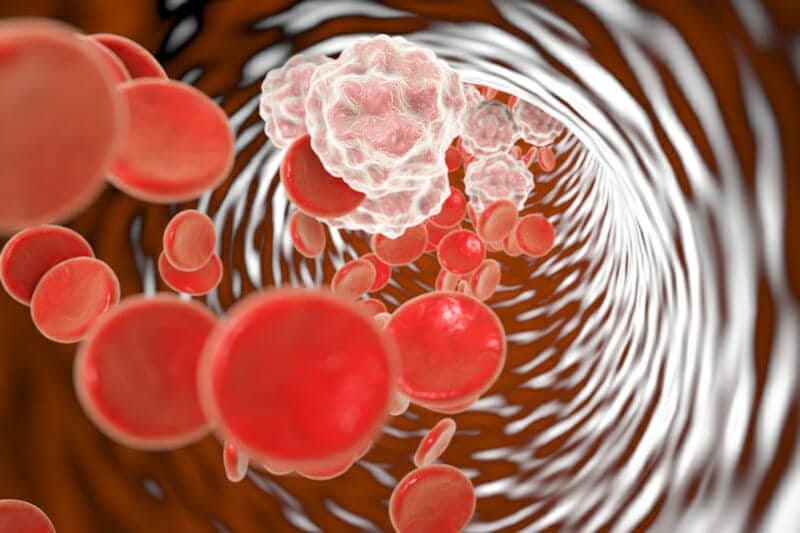 Everyone who has been reading my work knows I am evangelical about lowering your inflammation through practices such as grounding in nature.

GHK-Cu appears to be an effective agent for ridding your body of chronic inflammation:

“When GHK-Cu was used by mice with [lipopolysaccharide-induced acute lung injury], it attenuated related histological alterations in the lungs and suppressed the infiltration of inflammatory cells into the lung parenchyma.

The GHK-Cu also increased superoxide dismutase (SOD) activity while decreasing TNF-α and IL-6 production through the suppression of the phosphorylation of NF-κB p65 and p38 MAPK in the nucleus of lung cells.”

GHK-Cu controls the oxidative damage that occurs post-tissue injury (ex. a strike to the face), and reducing TNF-α induced secretion of IL-6 as described above is likely why this happens.

GHK-Cu is A Potent Antioxidant

People who live unhealthy lifestyles usually have an imbalance of free radicals and antioxidants in their system, which is dangerous for human health:

“A balance between free radicals and antioxidants is necessary for proper physiological function. If free radicals overwhelm the body’s ability to regulate them, a condition known as oxidative stress ensues. Free radicals thus adversely alter lipids, proteins, and DNA and trigger a number of human diseases”

GHK-Cu increases the expression of 14 antioxidant genes in the body, thereby reducing the concentration of harmful free radicals and the damage they cause to the human body:

“The antioxidant actions of GHK have been demonstrated in vitro and in animal wound healing studies. They include inhibiting the formation of reactive carbonyl species (RCS), detoxifying toxic products of lipid peroxidation such as acrolein, protecting keratinocytes from lethal UVB radiation, and preventing hepatic damage by dichloromethane radicals.”

GHK-Cu May Boost Your Immune System 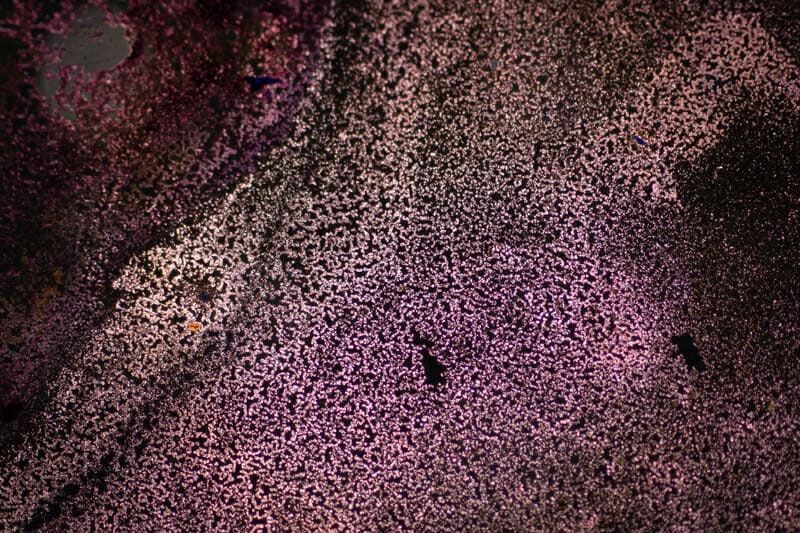 Copper has long been known to be effective against viruses and bacteria:

“Both gram positive and gram negative bacteria, including antibiotic resistant bacteria as well as hard to kill bacterial spores, fungi and viruses, when exposed to high copper concentrations, are killed. In some cases, they are killed within minutes of exposure to copper or copper compounds”

In particular, some old studies suggest GHK-Cu may be effective against certain strains of bacteria:

“In summary, the use of the GHK-Cu nanoparticles both improves wound cell function as measured by L929 dermal fibroblasts in culture and acts as an antibacterial against two common bacteria (E. coli and S. aureus).”

“Radiation damages cell DNA, thus impairing their function. Since GHK was able to restore function of irradiated fibroblasts, it has to have effects on DNA repair.

GHK-Cu Could Be Used to Fight Cancer 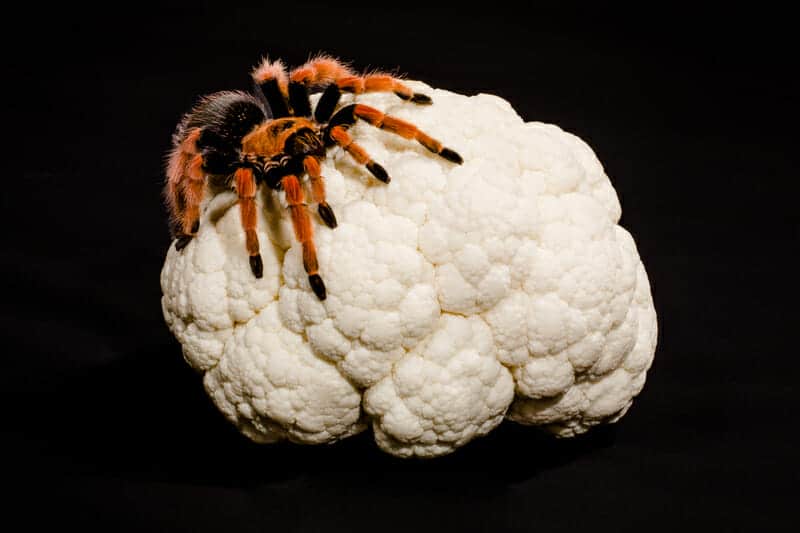 While it is far too early to say, one study involving GHK was able to lower the expression of certain genes responsible for promoting the metastasis of colon cancer:

“Our query of the later version of the ‘Connectivity Map’ query has returned GHK and securinine as candidate compounds or perturbagens that can significantly reverse the expressions of 70% of the 54 genes in the signature with minimum specificity indicating their unique connectivity with the signature.

GHK-Cu can even promote the production of p63, an integral protein for fighting against cellular senescence.

I’ve written two articles talking about how GHK-Cu can be used to treat hair loss problems (here and here).

But allow me to provide you with a high-level summary of how GHK-Cu works in this context: 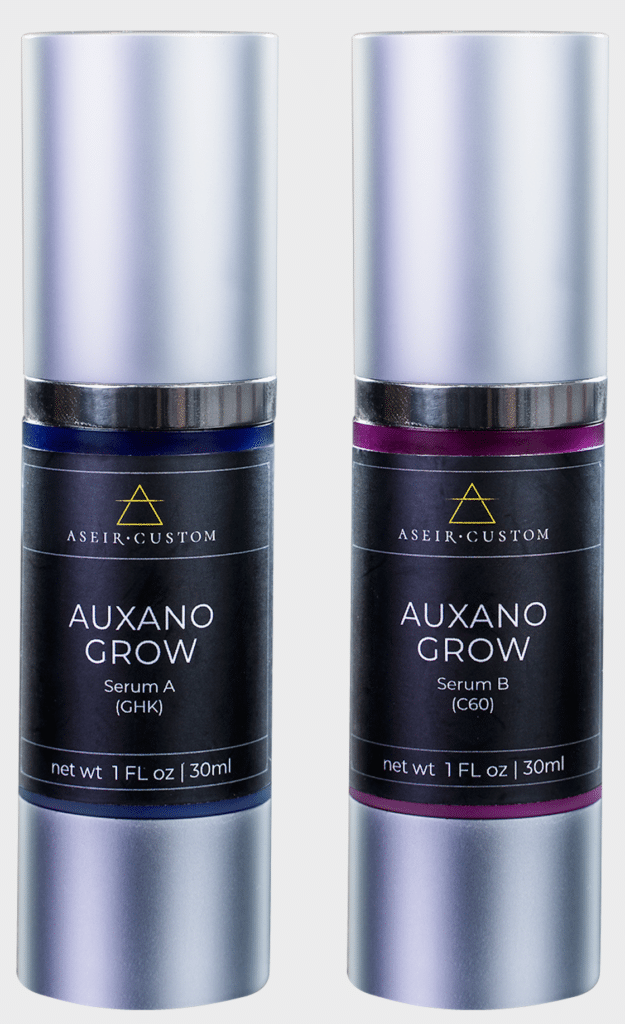 The BEST Dose of GHK-Cu (And How to Take It)

GHK-Cu is one of the easiest peptides to use, as it is usually made available in a cream or serum formulation applied topically to the area of interest.

This holds true for treating aging skin or “red” skin from sunburn or damage.

After cleansing your skin (usually by showering), apply a LIGHT amount of the GHK-Cu cream to the skin and gently massage it in for 5-10 seconds.

If you are using a 3% GHK-CU formulation (like my company AseirCustom’s Royal Blue Serum or Sky Blue Cream), this means using 2-4 pumps (0.21 mL – 0.81 mL) on average per application.

That’s literally it — apply, let the cream go through your skin, and you’re done!

The more severe your injury is, the more often you will have to use GHK-Cu.

How YOU Can Start Using GHK-Cu

GHK-Cu possesses an abundance of biological actions; thus it has a wide variety of roles in the human body.

Decades of clinical research reveal numerous health benefits behind this human tripeptide, which are of particular interest to everyone.

Whether you are a woman looking for the most potent anti-aging and rejuvenation cream in existence, or a man looking to heal your face from full-contact fighting practice, anyone and everyone should be using GHK-Cu where possible. 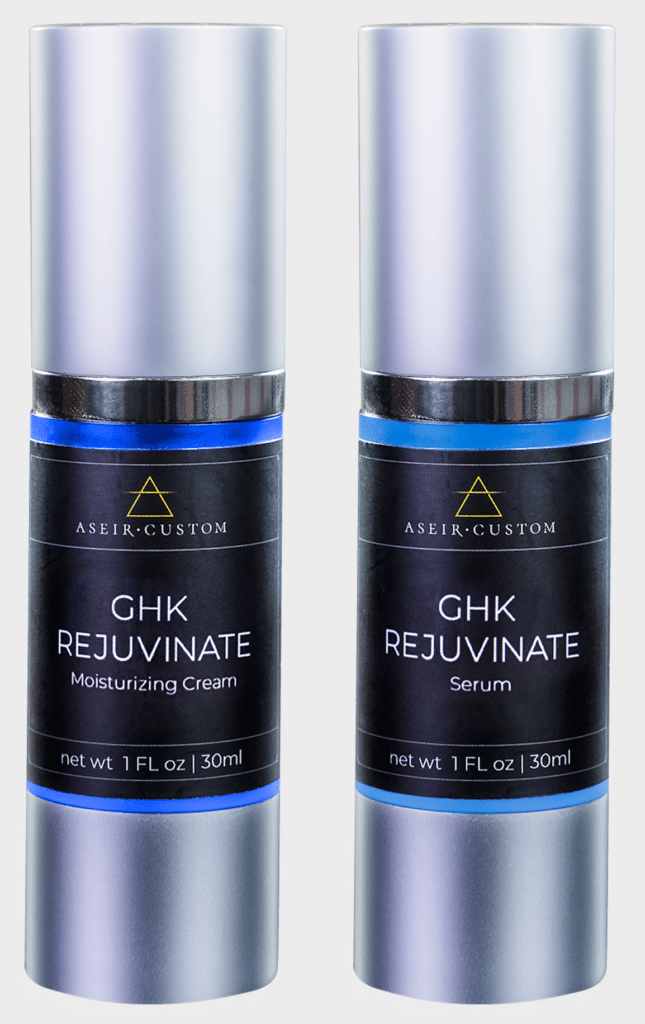 If you want the healthiest and youngest looking skin possible, choose to experience the transformative power of Copper Peptide GHK–Cu!

You will not be able to find another biomolecule in existence that can do as many things as well as GHK-Cu can.

If you want to learn more about GHK-Cu and its many other health benefits, I implore you to visit Dr. Loren Pickart’s website and browse through the HUNDREDS of GHK-Cu studies published under his own name.

And as always, Raise Your Vibration To Optimize Your Love Creation!